Roughly 1 in 3 kids in America is overweight or obese, but millions more “borderline” kids are on the cusp of a weight problem and need our help just as much. Doctors and proactive parents share their advice about how to fight fat without shaking a child’s self-confidence.

A good mom doesn’t make a big deal out of it when her little girl carries a few extra pounds. That’s what Rebecca Lawson thought to herself when she first noticed that her daughter, Grace, then nearly 3, seemed to be a bit heavier, and a lot hungrier, than most of her preschool peers. “Grace had always been somewhere on the higher end of the weight charts,” she recalls. “But the portions were becoming out of control. Rather than eating just a few carrots, she’d eat the whole bag—and a container of hummus too.” A former dancer who was well aware of how body-image hangups can lead to disordered eating, Lawson didn’t intervene—until Grace had her 3-year-old well visit. The pediatrician checked Grace’s BMI (body mass index, which shows how heavy a child is relative to her height) and revealed that she was around the 80th percentile, just five points shy of “overweight,” according to growth charts. “The doctor said that she was one of those borderline kids who could either stay at a high but normal weight or cross over into having a weight problem,” says Lawson.

The pediatrician preferred to try to head off a potential weight problem early on. To this mom from outside Boston, it just made good sense. Never mentioning the word weight, Lawson started taking subtle steps to help Grace be healthier. She talked to her daughter about recognizing her hunger cues—and to stop eating before getting that uncomfortable, “belly-bursting” feeling. Then, after realizing that Grace’s dance and gymnastics classes involved more sitting around than heart-pumping activity, she started encouraging Grace—as well as her younger son and her husband—to join her in backyard soccer games, weekend hikes, and bike rides. Today, Lawson is happy with her family’s healthier habits. But she’s hesitant to tell too many other parents what inspired them (in fact she asked that we use pseudonyms for this article). “At parties, parents automatically give Grace a second piece of cake when she asks for it. They’ll say, ‘She’s a growing girl. Feed her!’ You don’t want to be the fanatical mom, but having a child who’s on the verge of a weight problem but not obviously obese is sort of a lonely place to be.”

Indeed, in the public conversation about the obesity crisis, you don’t hear much about kids who are simply a little chubby. Media reports and political campaigns focus on the children who are clinically obese (with a BMI above the 95th percentile) and, to a slightly lesser extent, overweight (at or above the 85th percentile). Each year, efforts to help these kids—through behavioralintervention programs, medications, and treatments for weight-related health problems—cost the U.S. around $14 billion. But returns on this investment are scant. While childhood obesity has recently dipped in certain subgroups, such as low-income preschoolers, it remains stubbornly high overall. To make a real impact, say many experts, we need to focus on children like Grace, often referred to in research circles as having a “highnormal” BMI. These kids may not look worrisomely heavy, but they’re at risk for becoming so. Children age 41/2 and under who have a BMI between the 75th and 85th percentile are six times more likely to become overweight or obese by age 12 than kids with a BMI in the 50th percentile or lower, according to a study from the National Institute of Child Health and Human Development.

By then, the slippery slope becomes even steeper: 8 in 10 kids who are overweight or obese upon entering adolescence will remain so as grown-ups. It’s much easier to fix a budding weight issue than an established one, so intervening before these kids slide into a long-term problem is crucial. “This is true not only because bad habits are harder to break, but also because of the way that obesity alters your metabolism,” explains Stephen Cook, M.D., a pediatrician at Golisano Children’s Hospital, in Rochester, New York, and associate director of the American Academy of Pediatrics’ (AAP) Institute for Healthy Childhood Weight. “The longer you have excess body fat, the more your body will fight to keep your metabolism at that new ‘set point.’ “ In revised guidelines to help combat obesity published last summer, the AAP emphasized the importance of identifying kids early. Describing the success of treatment programs for heavy kids as “modest,” the AAP report suggested that obesity-prevention interventions should begin before a child approaches a BMI in the 85th percentile. “The earlier you start, the better,” agrees Parents advisor David Ludwig, M.D., Ph.D., who runs the New Balance Foundation Obesity Prevention Center at Boston Children’s Hospital. “Children have a unique advantage over adults: They’re still growing, so they don’t have to lose weight to grow out of a minor problem; they just need to slow their rate of weight gain.” 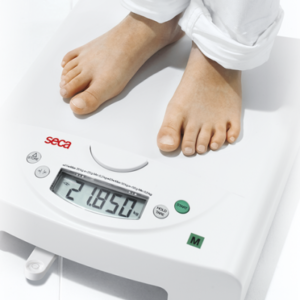 For a generation of parents reared on body-acceptance messages, the idea of red-flagging a little childhood chub may not sit right at first. My own 7-year-old’s BMI percentile in the low 90s caused some concern at a recent well visit, and it initially struck me as extreme to swap his favorite chips out of his lunch box or scrap dessert because of what looked to me like a little leftover baby fat. But the science shows us that small steps like these may be the most important investment we can make in our kids’ future. Big weight problems come with big health problems. Obese teens are more likely to have pre-diabetes, high cholesterol, fatty liver disease, bone and joint problems, and sleep apnea. Adult obesity is linked to heart disease, Type 2 diabetes, stroke, arthritis, and several types of cancer. And despite how common it is, “being fat” is the primary reason kids are bullied, according to University of Connecticut researchers. This may be one reason why childhood obesity is strongly linked with low selfesteem and depression in adulthood. “Obesity has now surpassed tobacco as the biggest threat to overall well-being,” says Dr. Ludwig. “Children are beginning life at greater risk for disease than any prior generation. Primary prevention is the key to reversing that.”