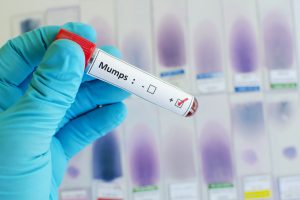 DOVER – The Delaware Division of Public Health (DPH) is now confirming 11 cases of the mumps as part of its ongoing investigation of an outbreak among attendees at a February dance festival in New Castle County. Seven of the 11 confirmed cases either attended, or lived with persons who attended, a social dance (Baile Mejicano or Mexican Dance) that took place at the Chase Center on the Riverfront in Wilmington on Feb.10, 2018. An eighth person was working at another Baile Mejicano dance, held at the same location, which occurred on March 3, 2018. DPH is still investigating the source of three people’s exposure to the mumps virus.

DPH is now recommending that anyone who attended either the Feb. 10 or March 3, 2018, dances contact their primary care physician to determine if they may have contracted mumps and if they and their family or close contacts need to receive vaccination against mumps.

Updated | Health officials confirmed that an outbreak of mumps is connected to two recent Mexican dance events, but they are still investigating the exact source of the viral infections.

The Delaware Division of Public Health had announced on Wednesday that seven people who have recently come down with mumps were either at the first dance event on February 10 or lived with someone who had attended, and an eighth was working at another such dance at the same venue three weeks later. The department had also reported a ninth case on Wednesday, but said they were still trying to find the source of the exposure.

Now the infection tally has jumped to 11.

“With a confirmed case of mumps showing up in someone involved in a second—more recent—social dance in such a short period of time, we are stepping up our outreach to attendees, whether or not they developed symptoms,” Dr. Awele Maduka-Ezeh, the health division’s medical director, said in Wednesday’s statement.

It came a week after officials announced they were investigating a possible mumps outbreak connected to a “Hispanic dance festival.”

Mumps can often be prevented with the MMR vaccine, which combats measles, mumps and rubella. Delaware now has 11 confirmed mumps cases. REUTERS/Brian Snyder