New research, published in the journal Laboratory Investigation, finds dramatic and almost immediate changes in the blood vessels of healthy men after they have consumed a single high-fat meal.

It is well known that a diet high in saturated fat is a contributing factor to the risk of heart disease.

The Centers for Disease Control and Prevention (CDC) warn that a diet high in fat and cholesterol may raise the risk of heart disease and cardiovascular illnesses, such as atherosclerosis — a disorder in which arteries can lose their elasticity.

Most of us understand that such a diet predisposes consumers to heart disease over time, but could it be the case that the effects of a single high-fat diet are immediately noticeable and damaging?

New research — carried out by scientists at the Medical College of Georgia (MCG) in Augusta — suggests that they are.

Tyler W. Benson, a doctoral student in The Graduate School at Augusta University, is the study’s first author.

Benson and colleagues divided 10 healthy men — who had been exercising regularly and had healthy levels of cholesterol and lipids in their blood — into two groups.

One group of five men was fed a super-high-fat milkshake. The fat in each meal was individually calculated so that participants were given levels of fat that were proportionate to their body weight.

By contrast, the other five men were fed a meal with the same number of calories, but low in fat. 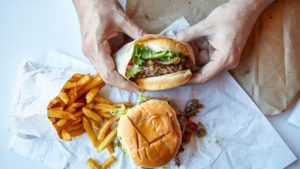 The researchers took biochemical tests of the participants 4 hours after the meals, focusing on the impact of high-fat food on red blood cells — the cells that carry oxygen through our blood.

As the researchers explain, we have about 25 trillion red blood cells that affect all the other cells in the human body.

Part of the reason why they are so important to cardiovascular health is that they carry cholesterol through the cardiovascular system, as well as nitric oxide. These are two substances that influence the elasticity of blood vessels.

The researchers found several changes to the red blood cells of the study participants. “They changed size, they changed shape, they got smaller,” says Dr. Ryan A. Harris, clinical exercise and vascular physiologist at Augusta University’s Georgia Prevention Institute.

Dr. Julia E. Brittain, vascular biologist at the MCG Vascular Biology Center and one of the corresponding authors of the study, explains these changes further, saying, “[Y]our red blood cells are normally nice and smooth and beautiful and the cells, after consumption of a high-fat meal, get these spikes on them.”

These spikes on red blood cells, the author says, makes them particularly damaging to blood vessels and sets the ground for heart disease.

Additionally, the researchers found an increase in reactive oxygen species, a change that can lead to disruptions in how the red cells function.

An assessment by the US President's Emergency Plan for AIDS Relief (PEPFAR) to determine the impact of COVID-19 mitigation strategies in 41 PEPFAR supported countries reported overall gains of 5% in the number of people on HIV treatment and a 2% increase in the number with viral load suppression in the first year of COVID-19 pandemic, despite challenges in delivery of services for HIV prevention and treatment the world over.  There was less progress on HIV testing with an overall 19% decline in new HIV-positive diagnoses. [...]