The results of this new study will be music to many dieters’ ears; researchers conclude that although pasta is famously carb-heavy, it might, in fact, help you to lose weight.

How sinful really is pasta?

Ravioli, macaroni, spaghetti, lasagna, cannelloni. No doubt you are salivating as you pronounce those words in your head with a poor Italian accent.

Pasta is loved far and wide, but for dieters, it is considered to be evil; along with cheese, cake, cheesecake, burgers, and cheeseburgers, it’s placed in the “don’t even look at it” category.

Since pasta is notoriously high in carbohydrates, the media and researchers alike are starting to turn their backs on it, blaming it, in part, for the obesity epidemic.

However, a group of researchers from St. Michael’s Hospital in Toronto, Canada, recently set out to investigate pasta’s bad name. Does this delicious wheat-based staple deserve to be so broadly chastised?

To investigate pasta and its impact on weight gain, the researchers leaped into the reams of data harvested by previous studies.

They undertook a systematic review and meta-analysis of 30 randomized control trials involving nearly 2,500 participants. In these studies, the participants replaced other sources of carbohydrates with pasta as part of a healthful, low-glycemic index (GI) diet.

The researchers’ results were published earlier this week in the journal BMJ Open. And, from initial impressions, the findings appear to be a huge win for pasta lovers and producers worldwide.

The participants — who ate an average of 3.3 servings of pasta each week in the place of other carbs — lost around half a kilogram during the follow-up period (which was a median of 12 weeks).

“In fact, analysis actually showed a small weight loss. So, contrary to concerns, perhaps pasta can be part of a healthy diet, such as a low-GI diet.”

“In weighing the evidence,” Dr. Sievenpiper continues, “we can now say with some confidence that pasta does not have an adverse effect on body weight outcomes when it is consumed as part of a healthy dietary pattern.”

Is this an Easter miracle? Well…no. The authors think that, because pasta has a relatively low GI compared with other refined carbohydrates, it causes smaller spikes in blood sugar levels.

Before you go crazy, it’s vital to read the part where it says, “[…] consumed as part of a healthy dietary pattern” — which means that you can’t smother it in 4 pounds of cheese. Sorry.

There’s no such thing as a free lunch

Sadly, before we get too excited, there are some issues that must be addressed. First of all, some of the authors of the study have received prior grants, donations of pasta, and travel support from Barilla, a pasta-making company. 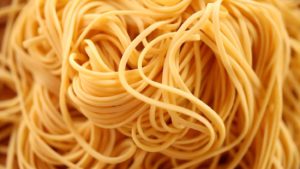 Although they state that “[n]one of the sponsors had a role in any aspect of the present study,” it would be remiss of me not to mention it.

The authors, too, note a number of issues with their work. For instance, they found “unexplained inconsistency” in some of the studies’ waist circumference and body fat measurements.

Also, they are concerned that their results only assessed pasta as part of a low-GI diet. In other words, none of the studies investigated pasta on its own, or as part of other diets, which limits the weight of the conclusions in real-life situations.

Additionally, many of the studies that were analyzed failed to mention exactly how much pasta was consumed by each participant.

Therefore, we can’t really draw the solid conclusions that we crave from this study. Your tagliatelle will still have some guilt attached, I’m afraid. But, if you ever feel the urge for pasta, you could re-read the study’s conclusions to lower your guilt levels briefly.

In short, pasta probably isn’t as bad as some things that you could eat. So — rather boringly — moderation is still the key.