In the wake of the Nobel Prize in Physiology of Medicine being awarded to James P. Allison and Tasuku Honjo for their pioneering work in immunotherapy, new findings could make the treatment even more potent in the fight against cancer.

Research that was led by Dr. Alicja Copik, from the University of Central Florida College of Medicine in Orlando, may have found a way to enhance a form of immunotherapy and potentially make it available, in the near future, to thousands of people living with cancer.

A new cancer vaccine, for instance, was proven to be 100 percent effective in mice when added to existing forms of immunotherapy, while another one has harnessed the human immune system against cancer, showing early promise in a clinical trial.

Currently, however, some immunotherapies will only work for a few hundred people whose tumors have a molecule called PDL1. In fact, Dr. Copik and her colleagues mention in their paper that approximately 15 percent of people with cancer respond to this treatment.

So, the scientists set out to boost the expression of this molecule, making cancer more vulnerable to immunotherapy.

They revealed that expression of this molecule is boosted by a cytokine, which is a type of protein secreted by the body’s immune cells called natural killer (NK) cells. So, the scientists continued to investigate ways in which the power of these NK cells can be increased.

The scientists detailed their findings in the journal OncoImmunology. Jeremiah L. Oyer is the first author of the paper. 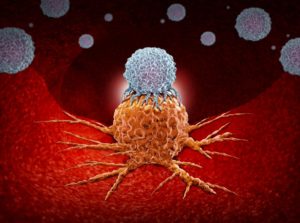 In older research, Dr. Copik has used nanoparticles to invigorate these NK cells. In their new study, however, she and her colleagues show that NK cells boosted with nanoparticles called PM21 particles can alter the molecular expression of tumors.

However, by blocking the PDL1 protection, “anti-PD-L1 immunotherapy” has been highly successful — even when the cancer had spread and reached stage 4 metastasis.

In the new study, Dr. Copik and her team used a mouse model of aggressive metastasized ovarian cancer. They found that nanoparticle-boosted NK cells force cancer cells to produce PDL1. This, in turn, made the anti-PD-L1 drugs effective.

Such a combined approach “slowed down tumor growth […] and significantly improved animal survival over the untreated group,” report the researchers. 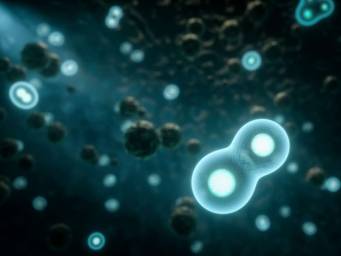 The “inclusion of anti-PD-L1 treatment with adoptive NK cell therapy should improve its efficacy and unleash the full potential of NK cells,” explain the authors, adding:

“Immunotherapy combinations, such as described here with a cell therapy and a targeted monoclonal antibody are likely to play a significant role in advancing clinical innovation in the near future.”

“[T]hese activated NK cells will work synergistically with these immunotherapies,” Dr. Copik reports, going on to cite previous research that showed that once they have penetrated the tumors, NK cells can enlist the help of other immune cells in the fight against cancer.

She is hopeful that NK cells will soon be used more widely to treat cancer, as this immunotherapy has far fewer side effects than either chemotherapy or radiation, since NK cells do not destroy healthy cells.

“As a scientist,” she says, “it’s important to know from physicians and patients, ‘Where are the gaps in treatment? Where are the challenges?’ You see where we should be directing our efforts.”

“And when you’re in the lab late at night you think about these patients. They are your motivation and your inspiration. You know we must do this work now because patients are waiting.”

New HIV diagnoses in gay and bisexual men fell by 20% after the implementation of a publicly funded PrEP programme in Scotland, while HIV incidence in a large cohort of men attending sexual health clinics fell by 43%, Professor Claudia Estcourt of Glasgow Caledonian University and colleagues report in AIDS. [...]

Bacterial STI rates rose in the year before starting PrEP, but not during PrEP, Australian study finds

A study of gay and bisexual male participants in the first large implementation study of HIV pre-exposure prophylaxis (PrEP) in Australia has found that although rates of bacterial sexually transmitted infections (STIs) were high, they did not increase in the two years after starting PrEP. In contrast, they increased significantly in the year before men started PrEP. [...]

CD4 count below 350 increases the risk of severe COVID-19

People with HIV with CD4 counts below 350 were almost three times more likely to experience severe COVID-19 symptoms than people with higher CD4 counts, confirming warnings by the British HIV Association and the European AIDS Clinical Society that immunosuppressed people with HIV are likely to be at higher risk of serious illness. [...]

We are excited to announce the sixth edition of our HIV & sex booklet, updated from 2016. This latest edition of HIV & sex represents a distinct shift from the previous one, with significant changes throughout. HIV & sex is available through our patient information scheme as an online booklet (PDF). Members can access it here: clinic.nam.org.uk [...]

As part of routine HIV care in many high-income countries, genetic resistance testing is done prior to starting treatment to ensure that a person’s virus is not resistant to a chosen antiretroviral medication. However, in addition to identifying potential drug resistant mutations, phylogenetic analysis of an individual’s virus is also carried out – when compared to other viruses, this provides information about how different viruses are related. [...]

What's needed to eliminate hepatitis C in people with HIV in Scotland?

Anthony Fauci: “I don’t do this because I’m a hero. I do it because it’s necessary.”

“The enormity of the problem is how I keep going,” Dr Anthony Fauci told a meeting of global health journalists yesterday. “I haven’t had a single day off since 20th January last year, but the necessity of dealing with the COVID epidemic is an anaesthetic against fatigue.” [...]

The risk of dementia in older age is increased by 58% for people living with HIV compared to their HIV-negative peers, according to US research published in the online edition of AIDS. The average age at dementia diagnosis was much younger for people with HIV: 67 years compared to 78 years for people without HIV. [...]

Research from specialist HIV prevention and treatment clinics for female sex workers in Nairobi has found that the number testing positive for HIV dropped by more than two-thirds between 2008 and 2017. While no single intervention can be identified as to the underlying cause in the decreasing numbers, it suggests that increasing HIV awareness, testing and treatment in Kenya are reaching this population of women, despite the criminalisation of sex work. [...]

Is reducing anxiety a legitimate indication for PrEP in itself?

Do doctors and other healthcare workers feel it’s legitimate to prescribe PrEP to people who are anxious about catching HIV, even if their actual risk is low? This question has rarely been systematically asked of doctors and other PrEP prescribers, even though a substantial body of research – summarised in the PrEP in Europe research briefing here – indicates that PrEP can have positive effects on the mental health of those who start using it. [...]